Previous Next
Youth Soccer: The 5 Worst Mistakes in College Recruiting

Youth Soccer News: No one ever thought it was going to be easy — but, no one ever realized how complex the college recruiting process was.

In the sea of organizations offering assistance to excited but overwhelmed and often confused college-bound athletes, there are clear distinctions.

Jeff Jaye, director of iSoccerPath and College Soccer Panels is the first to agree the landscape is littered with confusing options that often only add to the clutter of sifting through options instead of refining the information.  After all, there are thousands of options and limited resources.

Jaye is a father of a student-athlete and a successful businessman who saw the need in the market and focuses his energy on providing real educational opportunities to parents and students athletes to help navigate the complex world of college recruiting.

“Made for the parents by a parent. There is finally a connector from the club game to the college game. iSoccerPath helps prospective student-athletes find the correct fit,” says a Divison I Men’s NCAA Final Four Head Coach.

What motivates Jeff Jaye and how is iSoccerPath different? Here is an exclusive interview that offers a look behind the scenes.

Diane Scavuzzo: Are there secrets to getting recruited by a top college?

I think the biggest secret right now is that parents and kids don’t know that 80% of the process of getting a roster spot is all on them and not on their youth club.

Diane Scavuzzo: What are the top 5 mistakes players — and their parents — make when trying to get recruited by a college coach?

The biggest mistake is parents’ involvement. Parents must stay out of the communication cycle.

Jeff Jaye: It is simple. We often discover players do not know how to interview — either in person or on phone. Players also think their social media footprint is private and can’t be seen by college coaches and admissions. I also see parents and players believing that it’s the club’s responsibility to get their son or daughter into college.

Diane Scavuzzo: How do you define success?

Jeff Jaye:  Success — it is when we make a difference — When a top youth soccer club director or club board takes the time to listen to what we offer and sees how it can help their players and parents.

I want iSoccerPath to be part of the clubs’ CAP programs. Our program helps players and their families become familiar and comfortable with the college education process — we can answer their questions, help them practice how to answer questions and how to rethink their social media posts. 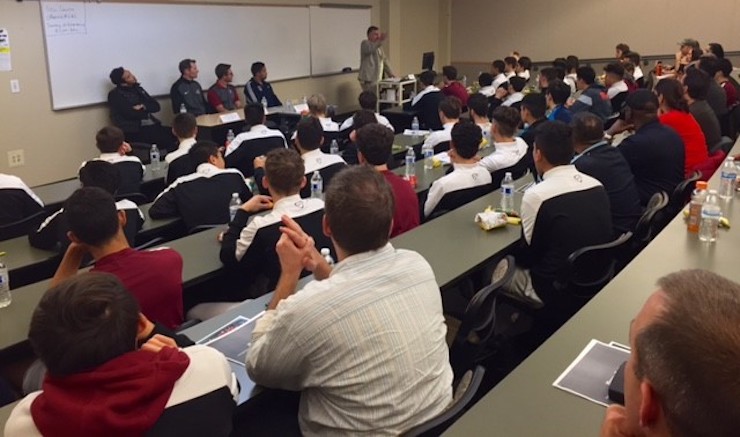 Diane Scavuzzo: How many kids have you worked with and helped?

Jeff Jaye: We are entering our third year and over 20,000 soccer families have attended our College Soccer Panels across the country. These include youth soccer club panels, college soccer id camps on campus, college soccer showcases and ID camps.  iSoccerPath has at any time over 200 boys and girls using our current programs.  In 2018, we plan on introducing our first-ever, national live on-line portal — then we will be able to work with over 10,000 families real time, right on their phones and help with real-time college education services.

Diane Scavuzzo: What is the most surprising thing you have learned about recruiting — since you launched iSoccerPath?

Jeff Jaye: That everything I think I know from working with college coaches changes every 3 to 6 months.

Between the NCAA and NAIA changing their rules on recruiting policies to coaches looking for many different types of players — the recruiting process is complex and it’s not just about being the best player or the one with the best grades anymore. 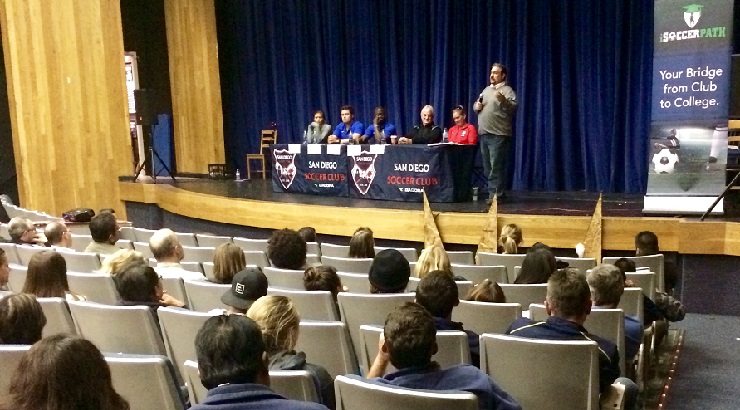 Diane Scavuzzo: There is so much talk about the U.S. Socer Development Academy (DA) and college coaches wanting to recruit players — Does being a player on a “DA” team really make a big diﬀerence?

That accounts for approximately 1,200 or so college roster spots.

While playing on a DA team does have advantages — with the extra exposure to college showcases — not being in one does not hinder a player’s recruiting opportunity.

In fact, college coaches have started to tell us that ID camps versus College Showcases now are the main ways to get seen and be evaluated.

COACHES PREFER TO RECRUIT AT A COLLEGE ID CAMP THAN AT A SHOWCASE.

Diane Scavuzzo: Is it practical to expect a college scholarship?

Jeff Jaye: First, there are 0 athletic scholarships in D3.

MANY D2 COACHES TELL US THAT THEY HAVE FEWER THAN 5 SCHOLARSHIPS EACH YEAR FOR A 30 PERSON ROSTER.

Division I programs have more scholarships but many are not fully funded at 14 for girls and 9.9 for boys.

If you go into the process thinking you won’t get any and you will get money from the other 3 buckets of funds — grades, government aid, and online scholarships — you will be so far in front of the game.

Diane Scavuzzo: Is it worth paying for help to navigate the college process?

Jeff Jaye: That’s a family’s choice. There are programs out there that charge thousands of dollars to do work that we believe college coaches never even look at or even respond to.

I think that iSoccerPath has found a way to keep it at $20 to $40 a month for what we offer. If we can give your family the tools to get your son’s or daughter’s emails opened, videos watched and coaches to their games, it is worth it.

Just think of the numbers — the sheer number of soccer players trying to get a spot is overwhelming.

Only roughly 7,000 spots each year for boys and 7,000 for girls programs and over 250,000 high school seniors trying — so having a small advantage is worth paying for.

Also, there are families that are stretched so thin time-wise with multiple kids and sports, we offer a little relief that way to them. Plus, we are familiar with this process — for first time parents, working with us can be invaluable and make a huge, lifelong difference.

Note: Part II of the Interview with Jeff Jaye, founder of iSoccerPath will come out next week!

Sign up today to be in the know! Gain helpful insights and tips on the best practices to adopt when it comes to be selected by a College Soccer Team.