Not Every Path Will Be Easy

Previous Next
Not Every Path Will Be Easy

th founder Jeff Jaye thought he had everything figured out. Little did he know he was going to get thrown a curve ball with his second child, Spenser.

She was following in her older brother’s footsteps with a love for the sport, but she had a few roadblocks that would make her journey a bit more difficult.

Spenser had a serious medical condition that made her miss her whole U14 and U15 playing years, and was also struggling with a learning disability that affected her test scores.

She was only able to play her U16 to U18 years on the “B team” of her clubs, and in the first summer game of her senior year, she tore her ACL and missed another 12 months of playing.

Most players wouldn’t even dream of trying to overcome these obstacles, but Spenser was determined to achieve her goal of continuing to play the game she loved at the college level.

Using the knowledge and skills he learned from helping other families, Jeff was able to help his own kids – both Spenser and his son, Dallas – earn athletic scholarships at Division I Universities. 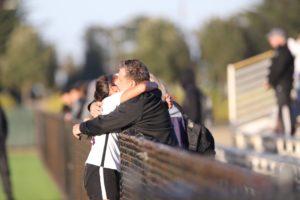 After graduating from Hawaii, she enrolled for her 5th season of eligibility at San Francisco State University, where she played and studied for a second degree in Marketing.

Spenser has also played for Guam at the international level, starting a family tradition with her brother Dallas, who has likewise represented Guam on the pitch.

She is considered a leader and role model for both of her college teams while still working through her medical and learning adversities.

Not everyone takes the same path to college, even within the same family. iSoccerPath is the only NCAA-approved education company that works to find the best solution for your soccer player.

What are you waiting for? With college coach-designed programs and tips and tools to keep you on track during the recruiting process, no obstacle should be looked at as too big to overcome.

Learn more at www.iSoccerPath.com, and start down your path today.