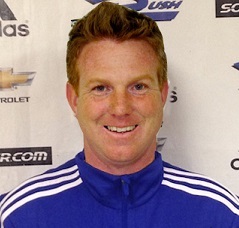 two months ago and after working with him closely and seeing his passion for helping promote the iSoccerPath programs to clubs, college coaches and families, we are incredibly honored to promote him to our Executive Staff helping grow ISP on the East Coast,” Jeff Jaye, Founder of iSoccerPath stated.

Andrew Vanover has been working in the soccer world since 1997 with a wide range of experiences. From coaching at the club level, to being a Director of Coaching as well as an assistant coach at the college level. He is currently with Capelli Sport and FC Europa based in South Pennsylvania, with his most recent job as the National College Advisory Program Director for Rush Soccer. He holds a USSF ‘A’ License and a USC Premier Diploma.

Vanover says, “In the short time I have been involved with iSoccerPath, I have no doubt the knowledge that can can be passed onto future student athletes is unprecedented. I look forward to spreading the word on how iSoccerPath can benefit the player that is looking to take their game to the college level. I am very excited for this opportunity!”